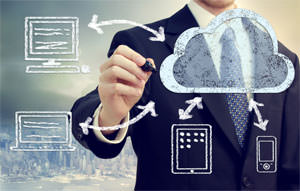 During daily operations at the average company, computer hardware is dramatically underutilized and inefficiently run.  Workplaces across a wide variety of industries can now benefit from implementing virtualization practices in their computer departments. As a manager, business owner, or IT professional, using virtualization techniques at your company will strengthen your IT infrastructure and bolster your bottom line.

While servers and computers traditionally run from a single operating system, virtualization expands the potential of that single computer to run multiple operating systems simultaneously. This is accomplished through the use of a hypervisor, a piece of computer hardware, firmware, or software that runs virtual machines. Using a hypervisor, a single server or computer can run several operating systems and support a wider variety of software programs and a larger volume of memory storage. Virtualization is similar to having multiple machines working at once or allowing access to multiple machines from one single piece of hardware.

One of the advantages of using virtualization to strengthen your IT infrastructure is a dramatic increase in efficiency. Companies utilizing virtualization technology enjoy more significant returns on their investments in computer hardware because they get more out of each device. With virtualization, a company can reduce its number of servers and computers, thus saving money on equipment purchases, reducing maintenance costs, and shrinking required storage space.

In addition, when virtualization is implemented, software upgrades, operating system changes, and fixes of computer or server malfunctions happen more easily and more quickly. Virtualization also allows the centralization of IT management, which can add to overall business efficiency.

Network virtualization consolidates network resources to break down the complexity of a network into manageable parts. Bandwidth is separated into individual channels that can be assigned to different servers or devices by the network administrator.

Virtualization is likely to gain popularity in the coming years as more and more companies take advantage of the increases in efficiency and the cost savings it offers. Using virtualization to strengthen your IT infrastructure is a good idea regardless of your industry. Entities as diverse as educational facilities, healthcare providers, and distribution centers use virtualization to optimize organization operations. Without using virtualization techniques, companies are likely going to suffer losses due to underutilized computer hardware resources and unnecessary expenses associated with obsolete IT tasks.

2 thoughts on “Using Virtualization to Strengthen Your IT Infrastructure”