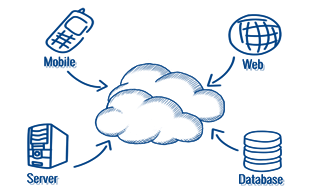 Information technology has advanced greatly in recent years due to the development of new hardware and software solutions. But one of the changes impacting on the current trend is concerns regarding to the use of remote resources on a large scale, called as cloud computing. In this article, we are going to explain the main characteristics of the new computing paradigm, the applicability, systems pioneers and future expectations.

“Cloud Servers” or the term “cloud computing” has become more popular in the recent years and it is associated with the use of a worldwide network of computers with massive use of physical or virtual servers for the allocation of a computing environment. The higher speed data transmission enables a company to access the necessary computing resources in real time, via an integrated network of applications, services and devices, regardless of where the resources are, who owns and maintains them.

Also, one may say that cloud computing is so identified, incorporates the paradigm service oriented architecture (SOA), where all functions of a system are seen as software services, independent and self contained. However, the concept of cloud computing goes further, and associated with other concepts like Software as a Service (SaaS), Platform as a Service (PaaS) and Infrastructure as a Service (IaaS).

Software as a Service (SaaS): It means a single software can be used by multiple users, whether individuals or companies. Such a service is executed and provided by servers in data centers and it the responsibility of a developer.

Platform as a Service (PaaS): Belongs to the availability of development platforms that facilitate the deployment of applications and hardware management and the underlying layers of software. It offers all the necessary things which are needed to support the complete cycle of developing and delivering the applications to the developers, IT managers and end users without the need of downloading and installing them on their computer systems.

Infrastructure as a Service (IaaS): The original known as Hardware as a Service (HaaS) was created by the popular economist Nichols Carr in the March 2006, and then began to be called as IaaS by companies. This is wide concept and is a part of an emerging trend where resources (as an infrastructure) are shared.

Pioneers in the Cloud

Google is the first to explore, which has developed and offered solutions for Office such text editor, spreadsheet, email and calendar in the year 2002. The company Yahoo is also known as on the pioneers of this concept. But Amazon is a great example here, as it provides software and hardware such as web services. Another great example is iCloud and operating system (OS) available for free, offered by Xcerion AB Company. Using a browser, users can utilize the resources of traditional operating system such as MS Windows, with the difference that the system is working remotely on a server located thousands of miles away.

What is expected in the Future?

According to the IDC – International Data Corporation, although the size of cloud hosting service has increased, still most of them are business applications. According to IDC, the storage options will have greater growth in the coming years.

3 thoughts on “Characteristics of Cloud Computing”